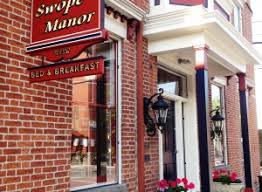 The Swope Manor and its property are rich in history.  The first structure on this property was a two story log building built by James Gettys in 1793 and for a short time was used as a jail.   The property was soon sold to William Smith for 3 pounds and 15 shillings who used the building for his family’s residence until 1802.  Records indicate that William Graham purchased the property as an investment and rented the log home to tenants until 1827. The property then was acquired from the Graham estate by Himes & Smyser and they too would rent the home to tenants for a number of years until George Swope purchased the property in 1836.

George Swope was born in Hanover, Pa in 1801 and at an early age came to Gettysburg to attend school.  His first job was as a clerk in a dry goods store where he picked up the trade very quickly. He opened his own store in 1825 in the town square on Chambersburg Street. Shortly after, he moved his store across from the Court House.  George married his long time sweetheart and Gettysburg resident, Margaret Smyser and they would have a son named John.  He also had a well-known reputation as being an honest, faithful and respected man who was also a successful financier.  George, in 1834 was elected director of the Bank of Gettysburg. In 1849 he was elected President where he served both positions until 1864 when he then was elected President and director to the Gettysburg National Bank.  Although a banker by trade he had his hand in many other successful businesses sharing his knowledge and expertise.  He was President and Director of The Gettysburg Railroad Co., Gettysburg Water Co., The Adams County Mutual Fire Insurance Co. and Gettysburg and Petersburg Turnpike Co.

After purchasing the property in 1836 Mr. Swope tore down the two story log home and built the handsome brick home you see today. Prior to the outbreak of the Civil War in 1860 George added an addition of a half story as well as the ornate trim you see around the roof, windows and entrance today.

George, his wife Margaret and their son John and his family were living in the home as both armies converged on Gettysburg.  They soon found themselves and their home in the midst of the chaos of battle.  On July 1st  the Swope family would watch Union men retreat from the battlefield racing by their windows with the Confederates close behind.  Just a few steps from The Swope Manor off Stratton Street an unidentified Union soldier was found by a Gettysburg citizen mortally wounded clutched in his hand  a picture of his three beautiful children.  The news of this story soon spread by the press and copies of the picture were published and sold for charity.  The picture found its way to Mrs. Phylinda Humiston of Portville, New York. She quickly realized that these were her children and her husband Sergeant Amos Humiston of the 154th New York Volunteers who had not written in some time and had been killed at the battle of Gettysburg.  You will find the monument dedicated to Sergeant Humiston just steps from the Inn near the building of the Gettysburg Fire Department.

The Confederates would occupy the town of Gettysburg and the buildings near and around The Swope Manor until their retreat but the effects of the battle would be with the Swope family for days to come. Lt. William Pohlman who was wounded on July 3rd during Pickett’s Charge was taken to a nearby field hospital and where he stayed until July 11th when he was moved to The Swope Manor for more comfortable quarters.  Although it appeared that Pohlman was getting better and in good spirits John Swope brought in an experienced surgeon from Baltimore to evaluate his wounds and determined that he was in favorable condition.

Pohlman had sent word to his sister in Albany, New York and each passing day asked about her whereabouts and if she had arrived to see him.  He had many visitors including John McClure, a family friend from his home town and upon seeing him he could hardly contain himself.  As the days past by Mr. McClure and the Swope family attended to Pohlman’s every need but on July 20th a secondary hemorrhage set in and he took a turn for the worse.  With every minute his condition worsening he fell into a coma and would not respond as many called his name.  A short time passed and Pohlman in a state of confusion raised his head and gave the order to “Cease Firing”.  Lt. Pohlman passed away from his wounds at 11:30 am on Tuesday, July 21st at The Swope Manor. His remains were sent home to Albany, New York in which hundreds of people attended the funeral of this fallen hero.  Now resting in the Albany Rural Cemetery his gravestone dedicated to his heroic actions as a soldier stands nearly six feet tall. Inscribed on his gravestone you will find the many battles he took part in as well as his final words “Cease Firing”.

It would take years for Gettysburg and its residents to recover from the horrific events of the battle and the devastation that it and the 165,000 soldiers left behind.  The Swope family would remain pillars of the community and help rebuild Gettysburg.

John Swope would go on and be a very successful man of his own. He attended Mount St. Mary’s Academy in Emmitsburg, Maryland. He went on to Graduate from Princeton and also attended the University of Pennsylvania where he practiced medicine. After a few years John gave up practicing medicine and pursued the mercantile business in Baltimore, Maryland.  He returned to Gettysburg and after the death of his father George Swope in 1879 he was elected President to the Gettysburg National Bank. Like his father John also pursued other ventures in the manufacturing and agricultural business. John was then elected to Congress in 1884 and served though 1885.  John would live in Washington D.C. as a banker until his death in 1910.  The prominent Swope family is interred in Gettysburg’s Evergreen Cemetery.

The Swope Manor over the next several years was used as apartments, offices, Doctors office and most recently the home of Ms. Dorothy Ralson.   Ms. Ralson was an artist and also sold dolls out of the carriage house in the rear of the property and it was her dream to turn The Swope Manor into a Bed and Breakfast but unfortunately, she passed away before making that dream a reality.

Thank you for a lovely stay. We would like to thank specially Maria and Bruce for their kindness and hospitality. Our room, General Meade, was impeccable. Breakfast was delicious!!!! The house is breathtaking!!!!! Looking forward to return and stay at your beautiful home. Again, many thanks!!!!!!

Thank you for a lovely stay. We would like to thank specially Maria and Bruce for their kindness and hospitality. Our room, General Meade, was impeccable. Breakfast was delicious!!!! The house is breathtaking!!!!! Looking forward to return and stay at your beautiful home. Again, many thanks!!!!!!

My husband and I spend our 3rd Wedding Anniversary and my Husband’s birthday in the Swope Manor. The Swope family and this manor played such a important part in the history of the Civil War that you can feel the presence of the past. We were so comfortable and felt so at home it was like we were in our own home for our four day stay. Swope Manor is decorated with beautiful antiques of the period. The wooden floors, fabulous rugs, high ceilings, large rooms are magnificent. John is the perfect host as is Bruce who cooked wonderful breakfasts. Love it.

My husband and I recently celebrated our third anniversary as well as my husband’s birthday at the Swope Manor. We could not have picked a better B&B. This manor and the Swope family were such an important part of the history of the Civil War that you can’t help but feel the past in this beautiful manor. We were so at home it was as though it was our own home during our four day stay. The beauty of the Swope Manor is everywhere from the wood floors to the furnishings. John is a wonderful warm host. The breakfasts that Bruce made were fabulous. Can not say enough.

My wife, Lynne, and I celebrated or 20th wedding anniversary at The Swope Manor last weekend and we loved it. We loved the place and we loved Van Richards and the staff. Already talking about coming back for another visit!

Thanks to Van Richards and his wonderful staff for a great stay in Gettysburg. My friend Mel and I felt at home and at ease in your wonderful quarters, and deeply nourished by all the fine care we received during our stay. We enjoyed meeting the other guests, relaxing on your deck, and savoring your delicious meals. We hope to return next year. Thanks again.

I am so looking forward to staying here in July!! Joyce H

Need a Reservation? Click here and we’ll help you make the right choice
MEETING & EVENTS - Find out more on how you can create a great moment.
GUEST REVIEWS - Click here to read what some our guests have to say.
Scroll to top